Connect and share knowledge within a single location that is structured and easy to search.

What is the history of Arts & Crafts stack and its scope?

What is the history of Arts & Crafts Stack Exchange and its scope?

Currently, there is a discussion about if the scope or name of the stack should change. There's also a fair number of closed or disputed questions (relative t our size) that ostensibly would be considered "arts" or "crafts" questions.

Would a more thorough understanding of where A&C.SE came from and how it got to be where it is now help in determining "Where do we go from here"?

A&C.SE has historically struggled to have 1 or more questions per day, on average.

However, we have a very strong organic view rate from Google searches, a high number of views per question, and a very high answer rate.

In order to increase the number of questions per day, which is one of the most critical stats we need to boost in order to maintain health and eventually graduate from Beta, we need more questions (obviously).

So, it seems necessary to try and evaluate why we are not getting more questions. It certainly doesn't seem to be because artists and crafters don't have questions.

And it doesn't seem to be because visual arts aren't successful on Stack Exchange: - Blender (a single 3D modeling application) gets 48 questions/day - Graphic Design gets almost 10/day - Photography gets almost 5/day - Video Production gets over 4/day

There could be many reasons why we don't have more questions being asked. Off the top of my head:

Most of these things we can't really change, without each active A&C.SE user taking it upon themselves to do things like ask more questions, outreach to other online art/craft communities, create and actively try to grow unofficial "official" community spaces (like an Amino, Discord, Facebook group, etc.). That's a high level of effort/investment, with an unknown level of payoff.

However, some of the things we can change as a whole.

These are comparatively low-effort tasks, where any level of payoff would be worthwhile, and any effort expended even if there is no payoff would be low enough to be negligible. Even if engaging in the discussions led to a "no, things are fine as they are now", that would still be a worthwhile decision.

One concern with any such changes would be to make sure we are not alienating existing users.

1. There were difficulties coming up with a suitable description, related to the existence of other stacks and the fact that there is no general consensus on a taxonomy of artistic disciplines. Besides answers to the question on Meta about a new description, there were the previous discussions on Area51, a smattering of comments across Main and Meta, and discussions in the chatroom.

Here are some specific examples of problems we faced:

Fine arts, visual arts, applied arts, decorative arts and crafts were all always intended to be in-scope, but there is ambiguity between what is an "art" and what is a "craft".

Additionally, there are historically clashes between art vs. craft, with self-described "artists" or "craftpeople" using the other term as a way to de-value a given work. The intent of A&C.SE is to be inclusive and supportive of the variety of creative outlets, and not create any type of Us vs. Them line in the sand.

Consider the following Venn diagrams, and please forgive the fact that the examples used are far from exhaustive lists of the categories applied. 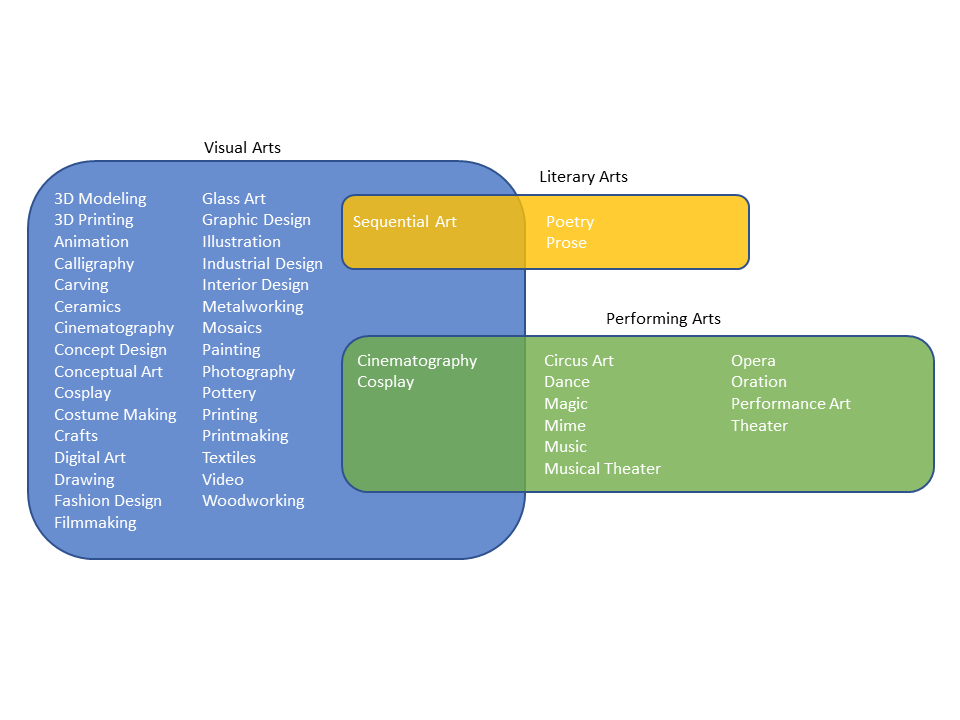 "The Arts" has several major categories such as visual arts, literary arts, and performing arts. While it has always appeared to be the intent of A&C.SE to only include disciplines that fit under the visual arts category, there are certain modern arts that could fall under multiple categories.

For example, "sequential art" is the art of storytelling through a sequence of images as in comics and manga. Such art can range from pure imagery, without text, to being accompanied by text that wins a Pulitzer Prize (Maus).

Then there's the cinematography and cosplay, which have a strong cross over with performing arts. 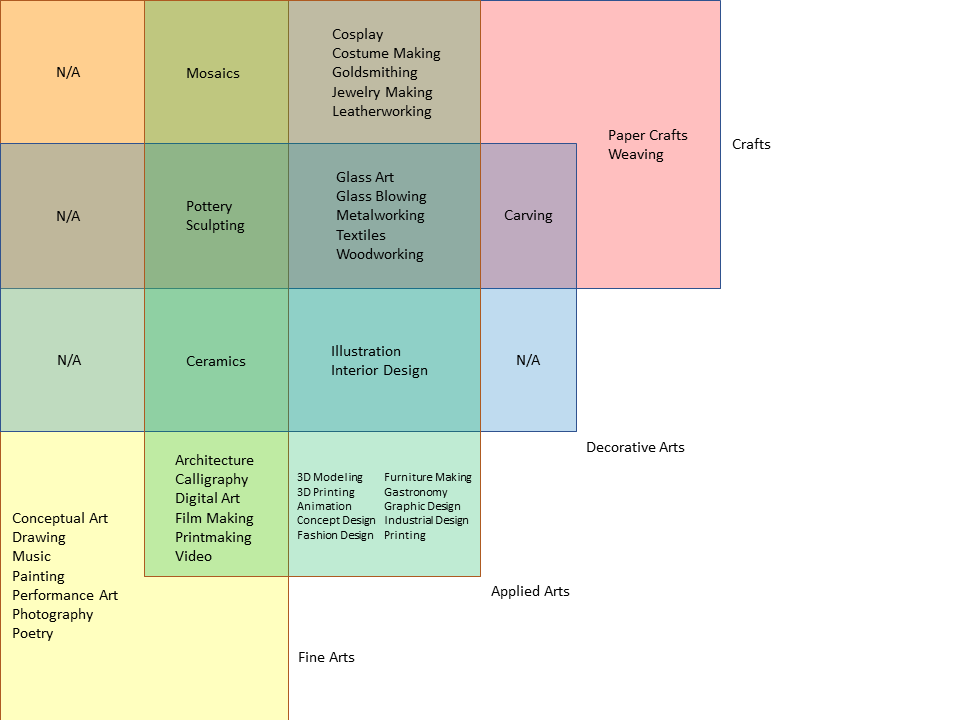 When you look just at visual arts, it becomes even more difficult to categorize. Common terminology for the various categories include: fine art, applied art, decorative art and crafts/trades. Other high-level categories exist, too. In general, the definitions of these categories varies depending on culture and time. Making an accurate diagram or taxonomy of categories then becomes a monumental task. And even if such a taxonomy existed, it may not make it easier to define the scope of A&C.SE in simple terms when we've chosen to explicitly exclude major fields such as photography.

2.These topics would need to justify that they're relevant to the goal of making things, but that may not be too difficult. Picking on history again, it could be argued that learning about what has been done before, why, why it stopped, etc. betters the creator by increasing their artistic/visual vocabulary and library, and helps those who want to create works that are influenced by or homages to certain themes/trends/movements/artists. This is a whole discussion in itself, but it makes for an easy example.

This site is for discussion about Arts & Crafts Stack Exchange. You must have an account there to participate.

8
Are unconventional canvases generally on-topic?
5
Can we take questions asking for a description of an art genre?
6
Scope reconsideration: practical suggestions
2
What are our thoughts on whether general “how do I fix this” questions are on topic or not?
3
What makes this color theory question about walls and LED bulbs off-topic?

5
What are Arts and Crafts?
1
How will we handle overlap with DIY.SE?
5
New site description
4
So, how do we all feel about Hats?
4
Do we want a custom close reason for questions about art history/appreciation?
5
Should we reconsider the name or scope of “Arts & Crafts”?
6
Announcing a Pro Tempore Moderator election - Nominations begin August 10th
6
Scope reconsideration: practical suggestions